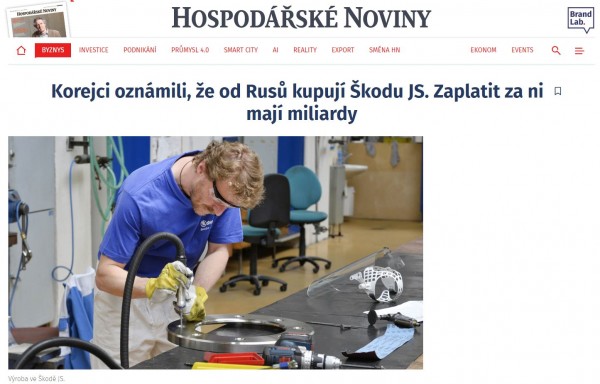 Koreans announced that they buy Skoda JS from the Russians. They have billions to pay for it.
- Václav LavičkaPetr Zenkner
Dec 5, 2019 17:27

There will be a significant property change across the core business. Russia Gazprombank sells nuclear technology supplier? Koda JS. The South Korean conglomerate Korean Heavy Industry & Development is a buyer of a Pilsen company with a turnover of more than four billion crowns (about 160 million euros) last year. According to HN, the purchase price is several hundred million crowns. EUR.

"We are expecting all our agreements on the takeover of the JS code even in the first half of 2020, when we will also take control and ownership," said Patrik Jin-Sung Jun , President and Chairman of the Board of Directors of Korean Heavy Industry & Development. The company is a financial group that invests in engineering companies? Around the world, it trades in LNG oil and liquefied gas.

According to Koreans? damaging JS excellent know-how, but the company kodi international sanctions due to the Russian occupation of the Crimea. "It is the only domestic company on the US sanctions list, but it does not appear on the EU list. Sanctions are a substantial reason why the Russians decided to sell the company," he says for HN.

Despite the problems si koda JS maintains profitability, its operating profit last year in sales of over four billion crowns tem? 257 million? crowns. Jeji momentaln? The most important contract is supplies for the Mochovce nuclear power plant in Slovakia, where the company produced two pressure vessels of the VVER 440 type reactor. The latest company closed in Ukraine? contract for 27 million? EUR (about 690 million? year) for two blocks of the Rovenske nuclear power plant.

Most involved in manufacturing? Now they do near the Pilsen engineering containers for spent fuel Czech and foreign
power plants. In addition to supplies for Russian VVER reactors, the company also supplies French reactors from Areva. A contract worth nearly 400 million? crowns gained on British nuclear power? Hinkley Point.

Indeed, only about a quarter of the company's sales are Czech. "We are doing a complete service and maintenance of the primary circuit of all the six blocks we have here. Further modernizing the events in Temelin and Dukovany, we ensured the increase of power stations and supplies Some parts, "said in June in an interview for HN general manager koda JS Vladimir Poklop.

In 2014, the company paid for stopping the nuclear tender in Temelin. According to Hatch, in him lost three years of work their best people. "We will state that it only offered us a quarter of a billion crowns. The code itself, not the consortium with Rosatom we were in," said Poklop.

The incoming South Korean investor promises to "normalize the situation around sanction regimes." a aktivn? took part in the current business cases and winning new orders. "This will allow JS to return to where it belongs, ie the leader among the suppliers of nuclear facilities," added Patrik Jin-Sung Jun. According to him, the concern pom? E? Kod? strengthen its presence in the existing markets and gain new markets.

JS management is not yet familiar with the upcoming change of owner. "We cannot confirm the information you provided," Jan Stolar spokesman said.

I check my company through two publicly? non-traded funds resident in the Netherlands. Koda JS belongs to the Gazprom-controlled engineering group Uralmash, is it? in the past, it also owned the Pilsen Steel Engineering Plant.

The Gazprom group is not affiliated with Russia's main contractor, Rosatom, who is seeking a contract to complete the Dukovany power plant. On the other hand, there are intensified relations between the two Russian groups and did not get the koda JS recently? the only significant order. According to HN Czech government long-term? encourages the company to get out of Russian hands.

Except? Rosatomu is another major interested in Dukovany South Korean KHNP. It builds and operates nuclear reactors directly in South Korea. Outside the homeland, only Barakah Power Station in the United Arab Emirates has completed the project. Property transfer in one of the tem? certain suppliers? for Dukovany, but according to one of the sources? HN does not mean that the position of a Korean firm in the tender will automatically strengthen.

Korean Heavy Industry & Development is based in Seoul. Kancela? in Los Angeles is responsible for developing international projects ?, the office? in New York, it provides project management. Subsidiaries of the Korean concern are Irish Sinoterra Global Limited and the venture-oriented Vetok.

With the contribution of Martin Ehl