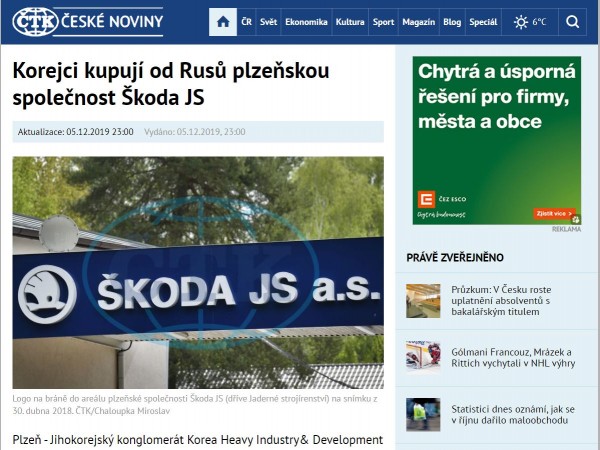 "We expect all our agreements to take over Skoda JS in the first half of 2020, when we will also take control and ownership rights," said Korean Chairman and Chairman Patrik Jin-Sung Jun.

The management of Škoda JS said that it is not yet aware of the planned change of owner. "We cannot confirm the information you provide," said Jan Stolár, a company spokesman. The Russian side has not yet commented on the forthcoming transaction.

According to Koreans, the company has excellent know-how, but it is harmed by international sanctions for the Russian occupation of Crimea. Despite these problems, Škoda JS maintains profitability. Its main contract is currently deliveries for the Slovak nuclear power plant Mochovce. Most recently, the company has concluded a contract in Ukraine worth 27 million euros (about 690 million crowns) for two units of the Nuclear Power Plant. According to HN, the contract for nearly CZK 400 million was also awarded to the British nuclear power plant Hinkley Point, where reactors are supplied by the French Areva.

Skoda JS with 1,100 employees posted a profit before tax of CZK 235 million last year with revenues of CZK 4.1 billion. Due to the lack of opportunities in the Czech Republic must increasingly focus on exports, which last year went to 14 countries and contributed to the company's turnover 68 percent.

Korea Heavy Industry & Development is a financial investor that buys engineering companies worldwide and also trades in LNG oil and liquefied gas. Skoda JS still belongs to the Gazprom-controlled engineering group Uralmash. In the past, it also owned the Pilsen Steel engineering plant, which went into insolvency this year.